Week 17: The Miserable Ones 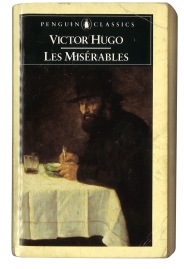 For the past two months I’ve been reading Les Misérables by Victor Hugo. At 1,200 pages it’s one of the longest books I’ve read and this week I finished it. (The Naked God: Night’s Dawn Trilogy by Peter F. Hamilton was the longest, 1,364 pages.) An eon ago I attempted Tolstoy’s War and Peace but gave up after page 600, mostly out of boredom, so I consider it an accomplishment to have made it through Hugo’s verbose masterpiece.

Published in 1862, Les Misérables follows the lives of four characters – Fantine, Cosette, Marius and Jean Valjean – and brilliantly links their stories with two men. It is an epic saga in the truest sense but not only because the story spans a period
of 18 years. There is nothing brief in this work of art. Hugo took six pages to explain the difference between an insurrection (national) and a revolt (street riot), developed a character over the course of seven pages only to kill him on the eighth, narrated the entire battle of Waterloo, wrote 14 pages on the Paris sewer system and began Part Four with Book One’s A Few Pages of History – 29 pages, to be exact.

If Hugo hadn’t written so eloquently, I don’t think I would’ve been able to get through this book. He had a knack for describing a scene clearly, turning a phrase and, ironically, summarizing a description succinctly with one sentence.

As far as sight could reach there was nothing to be seen but slaughter-houses, the wall, and an occasional factory looking like a barracks or a monastery… No accident of terrain, not an architectural flourish, not a bend or curve: a glacial setting, rectilinear and hideous. Nothing chills the heart like symmetry, for symmetry is ennui and ennui is at the heart of grief. Despair is a yawn. It is possible to conceive of something even more terrible than a hell of suffering, and that is a hell of boredom. If such a hell exists, that stretch of the Boulevard de l’Hôpital might have been the road leading to it.

The room on the upper floor housing the ‘restaurant’ was a long place cluttered with tables, benches, chairs, stools, and the ancient rickety billiard table. One reached it by way of the spiral staircase, which ended in a square hold in the corner, like a ship’s hatchway. Lighted by a single narrow window and a lamp that was always kept burning, it had the look of a lumber-room. Every article of furniture with four legs behaved as though it had only three.

To love or to have loved is all-sufficing. We must not ask for more. No other pearl is to be found in the shadowed folds of life. To love is an accomplishment.

Victor Hugo painted a vivid, realistic and intriguing picture of France at the beginning of the nineteenth century in all its poor, desperate and compassionate glory. He provided a rare window into the human condition that has stood the test of time. I’ve read books that stay with me for a few days or weeks but Les Misérables will stay with me for a long while. I’m looking forward to watching the movie and/or play.

THE WEEK IN REVIEW

I finally completed a baby blanket for the new baby next door. Nicholas was born on Feb. 15 and he is such a cutie. I hope he’ll enjoy this blanket as much as Evan loves his Baba.

Week #3 in the No Cracker-Granola-Cookie Challenge was Goldfish Redux. I’ve concluded that using butter results in a bread-like cracker. I was brought back from the brink of giving up with a recipe using vegetable oil. It called for cheese powder (not acceptable in anything but a dog biscuit) but I used Imperial cheese instead, a nice sharp flavour. The result: A CRACKER! Finally.

I also made graham crackers. They were yummy but a lot of effort and a hard dough to work with. As it turns out, I halved the recipe and forgot to halve the butter so that explains the hard to work with part. I served them to the boys spread with butter and sprinkled with brown sugar, just like my mom used to.

For squares three and four I tried out a new “in the round” pattern. I also played
around with some square patterns for squares five and six. I like the effect but there were 17 ends to tie in so I’m not sure it’s worth it. I had a lot of little balls and thought it was a good use for them. 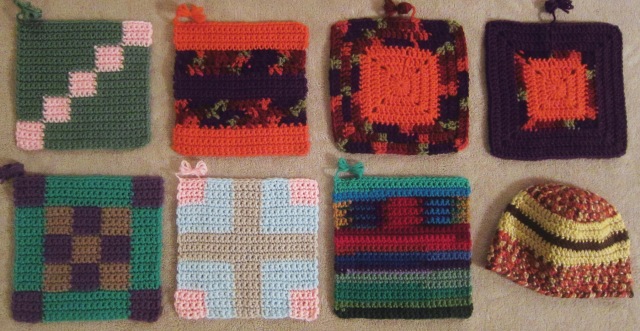 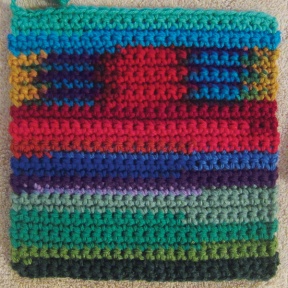 Square seven was a Magic Knot special. I really like the resulting colour combination.

I've been a crocheter since I was wee and I've been knitting since 2013. My life is filled with love and joy from my two boys, Mason and Evan, my dear husband and our dog.
View all posts by Andrea Squared →
This entry was posted in Uncategorized. Bookmark the permalink.

2 Responses to Week 17: The Miserable Ones