June: The Month of Younger Ones

On June 16, 1976, about 10,000 black school children marched the streets of Soweto, South Africa in a column more than half a mile long, protesting the inferior quality of their education and demanding the right to be taught in their own language. Hundreds of children were shot down by security forces and more than a hundred people were killed during the following two weeks of protest, not to mention the countless number who were injured.

Coinciding with the Day of the African Child is World Wide Knit in Public Day, from June 14 to June 22. WWKPD has grown from a single day to a week-long celebration and serves as a way for knitters/crocheters to come together and enjoy each other’s company. I don’t mind crocheting in public. Many people will stare, mostly because they’re transfixed by how fast my fingers move. I’ve encouraged more than a few people to learn, taught two people how to crochet and spread the word about KAS to as many people as will listen.

Also of note are some June factoids. The first is that June is the month with the longest daylight hours in the Northern Hemisphere and the shortest number of daylight hours in the Southern Hemisphere, where South Africa is. The second interesting tidbit is that the name June is fabled to come from the Latin word iuniores, meaning “younger ones,” as opposed to maiores (“elders”) for the month of May.

When I took all of these things into consideration, I immediately wanted to make a Hexagon Sweater for the June challenge. It’s a perfect way to honour the children of South Africa, I can work on it anywhere and it keeps the little ones warm during the darker winter months.

I picked up this fantastic green yarn on our last trip to the U.S. and paired it with a beautiful periwinkle-lavendar (actually called Lavender Blue on the label). Hopefully these vibrant colours will brighten a dark night. 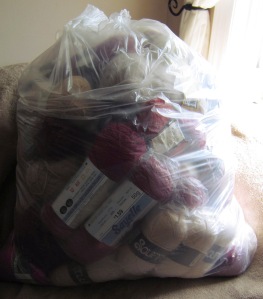 Last night I was also lucky enough to receive a HUGE bag of donated yarn by someone who was looking to contribute to a charitable cause. I can’t wait to sift through this bag of varied colours, textures and fibres. It’s almost like Christmas all over again!

Have fun with this challenge and be sure to check out some of the amazingly creative squares fellow members have made, from the African Flower pattern to educational squares to African colour themes!

I've been a crocheter since I was wee and I've been knitting since 2013. My life is filled with love and joy from my two boys, Mason and Evan, my dear husband and our dog.
View all posts by Andrea Squared →
This entry was posted in Uncategorized. Bookmark the permalink.

12 Responses to June: The Month of Younger Ones